Discover the beauty and charm of Transylvania in our bespoke 5 days tour starting from Brasov. We have included in the program the unmissable touristic attractions in Transylvania:

Our custom tour of Transylvania from Brasov is a 5-days trip. This way, you will have enough time to profoundly explore the region, at a comfortable pace. We will travel around Transylvania, from Brasov, where we will spend 3 nights, to Sibiu, where we will spend 2 nights. The trip itinerary is flexible, so at our guests’ request, we can adjust it to fit their agenda and the time available.

The price starts from 350 EUR/person. This price is valid for a group of 8 persons and for an average price of accommodation of a maximum of 70 EUR/night for a double room, including breakfast. Please see below the price per person, depending on the group size. The hotels or guesthouses where we will stay will be chosen together; we will give you a few options and you will have the final word regarding the accommodation. Depending on the hotels you choose and the final itinerary, the price can change, so, for a custom offer please contact us.

Level of physical activity: Moderate. Our guests need to be able to walk a maximum of 5 km per day or climb stairs.

Transylvania tour from Brasov will start with the most popular touristic attractions in Romania: Peles Castle and Bran Castle. We will pick you in Brasov (or in Bucharest if your flight lands there) and head to the summer residence of the first king in Romania: Peles Castle, built in the 19th century. Although the capital of the Romanian Kingdom was in Bucharest, king Carol the 1st loved spending time at the foothills of the Carpathians, enjoying the fresh air and the stunning mountain views. So, he hired a multinational team of architects, builders, and interior designers who raised a unique palace, bearing the influence of the king’s aesthetic taste. The construction took more than 40 years, and the result was a modern palace, built in an eclectic style, from which the German neo-renaissance elements can be best distinguished. 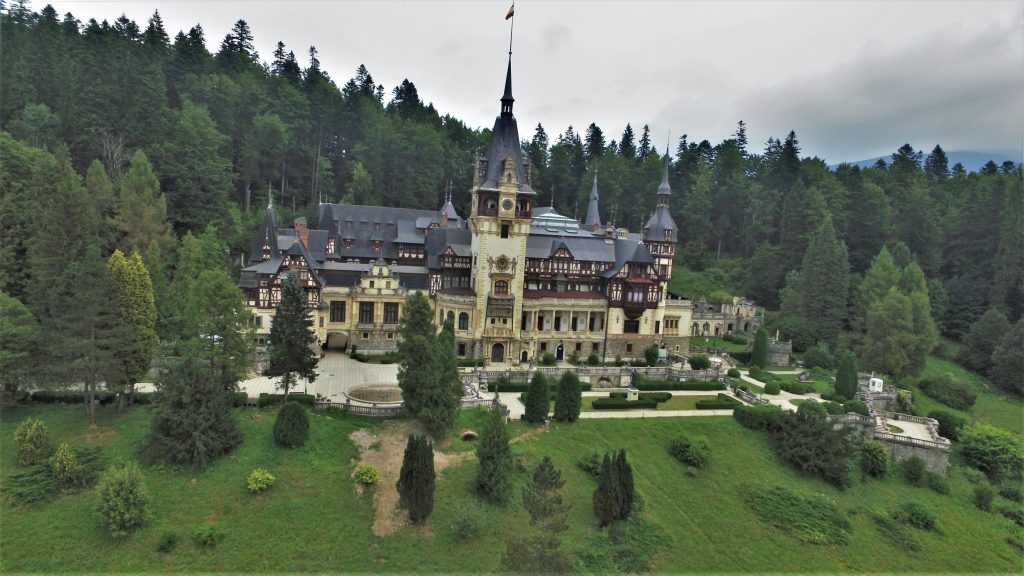 From Sinaia, the city where Peles is, we will head to Bran, to visit the famous castle. Known in the entire world as the Dracula’s castle, Bran’s real history is actually very different. Built in the 14th century as a border stronghold, between Transylvania and Wallachia, Bran Castle was the silent witness of the tumultuous events that happened for centuries in that corner of Transylvania. Starting in 1922, the castle began a new life, being modernised and transformed into a romantic summer residence by the beloved Queen Mary of Romania.

The connection with Dracula’s story came after Bram Stoker novel was discovered by Hollywood, and thus the infamous vampire won worldwide fame. People started to look for Dracula’s castle in Transylvania and they found it in Bran, due to the close resemblance with the castle in Bram Stoker’s book. Actually, the writer never mentioned the village of Bran in the book, but it seems a lot of people don’t care about it. For them, Bran Castle is Dracula’s Castle. 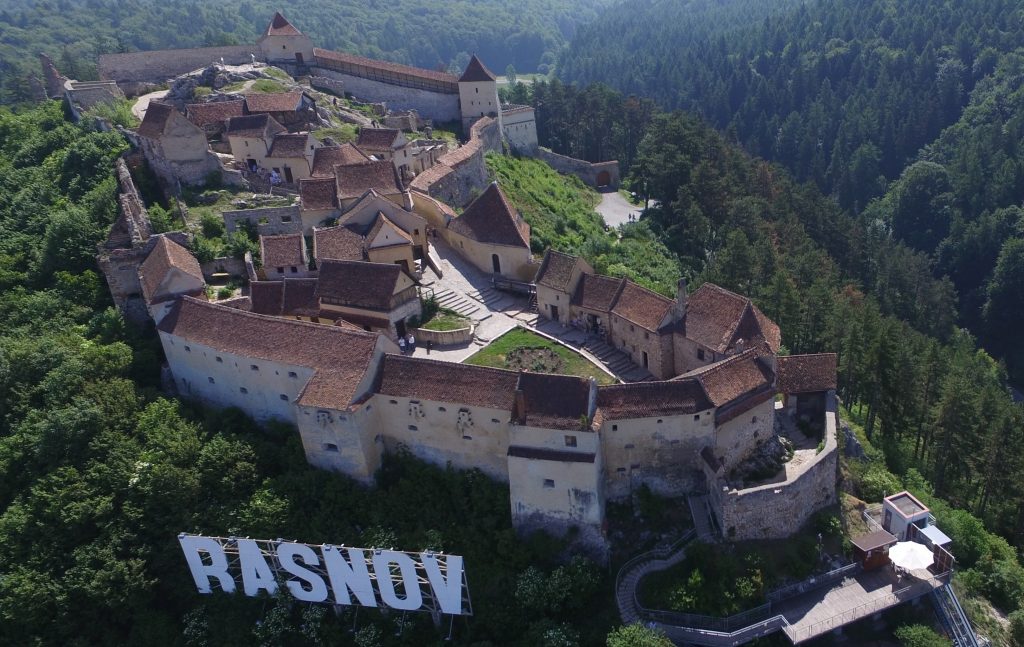 Day 2: The bear sanctuary and hiking in the mountain villages

Today we will spend the time in the beautiful natural setting of the foothills of the Carpathian Mountains. First, we will head to Zarnesti, to visit the largest brown bear sanctuary in the world. Run by a courageous NGO, the reservation became the home of more than 100 bears and other wild animals, who were brought there from unsuitable zoos, or kept captive by private persons, were orphans, or animals who got used with humans and became a threat for them. If you want to see them live, here the link to the reservation youtube channel. 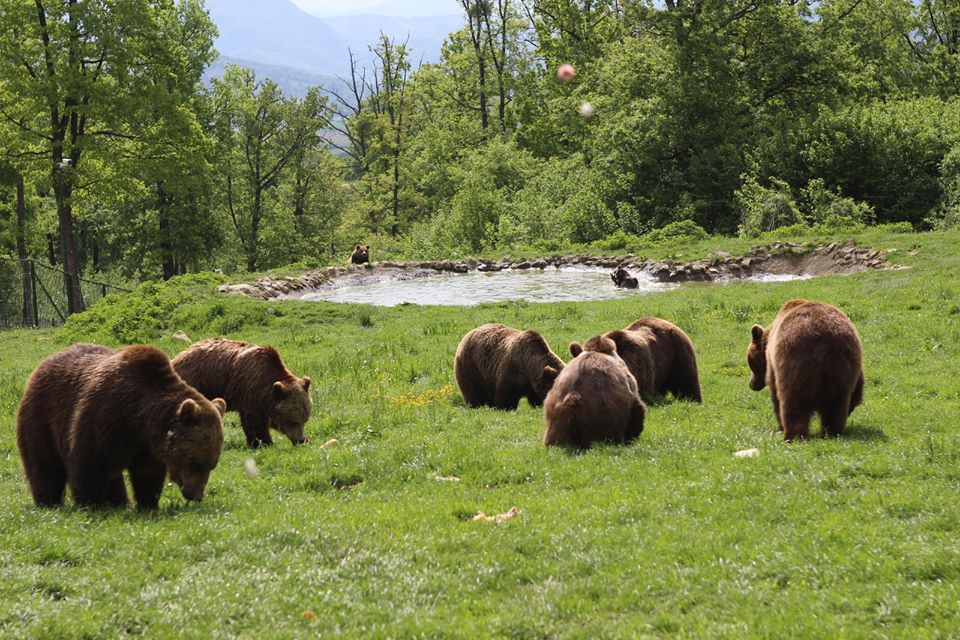 Just a few of the bears from the Reservation

Then, we will head to the foothills of the Carpathians mountains, to have a walk through the beautiful mountain villages in Moieciu area. We will enjoy splendid mountain views, fresh air, charming rural landscapes dotted with haystacks, traditional houses and cows or sheep grazing the pastures. 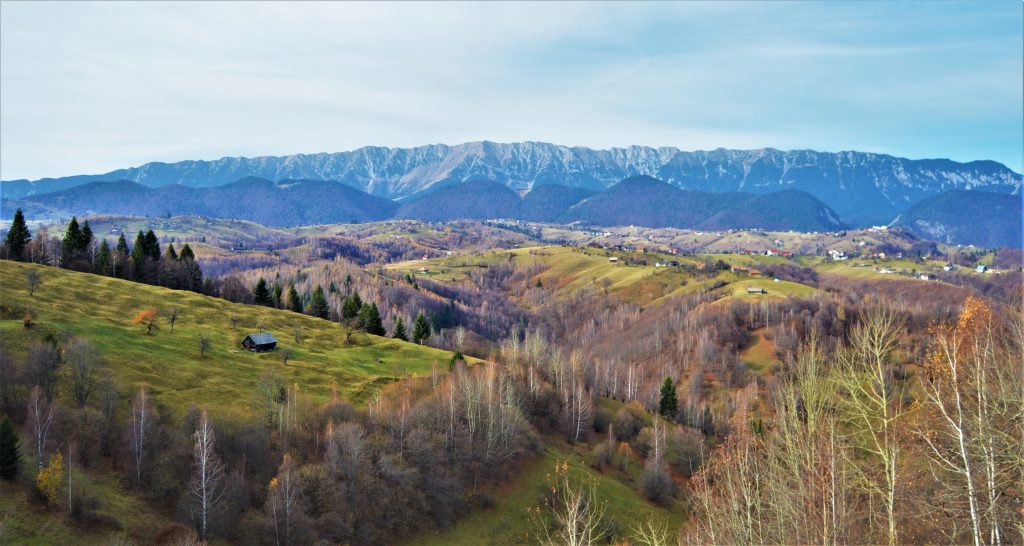 Rural landscape at the foothills at the Carpathian Mountains
Then, we will return back to our hotel in Brasov, where we will spend the night.

Day 3: Sighisoara and the fortified churches

Today we will leave Brasov for Sibiu. Before arriving in Sibiu we will visit 3 UNESCO places: 2 fortified churches and a medieval citadel. The first fortified church is just a few minutes from Brasov, at Prejmer. It has solid walls and enough rooms inside for every family from the village. Here they were finding shelter during the Turkish or other foreign raids. The fortress has inside even a school, a sign that centuries ago, wars or invasions weren’t an excuse to stop going to school.
Inside lies also the beautiful church, raised by the Teutonic Knights in the 13th century. 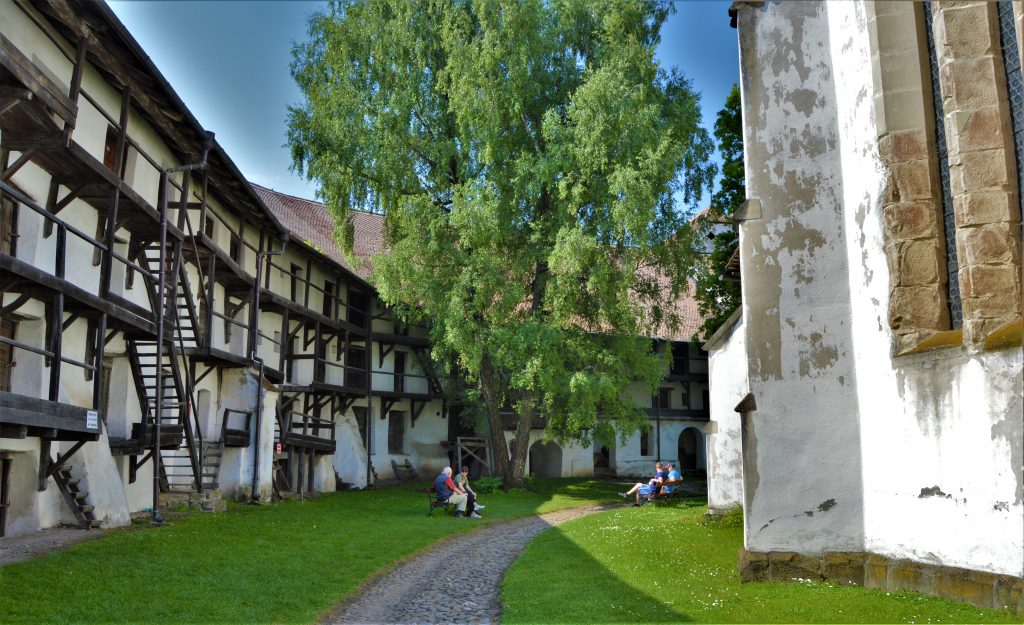 Then we will go to Sighisoara, where we will visit the beautiful medieval citadel, one of the seven Saxon towns in Transylvania. Seeing the massive medieval walls strengthened with imposing defence towers, narrow cobbled streets and colourful houses is like stepping back in time. Sighisoara is also the birthplace of Vlad the Impaler, the historical personage who inspired the Irish writer Bram Stoker to create the vampire count Dracula. 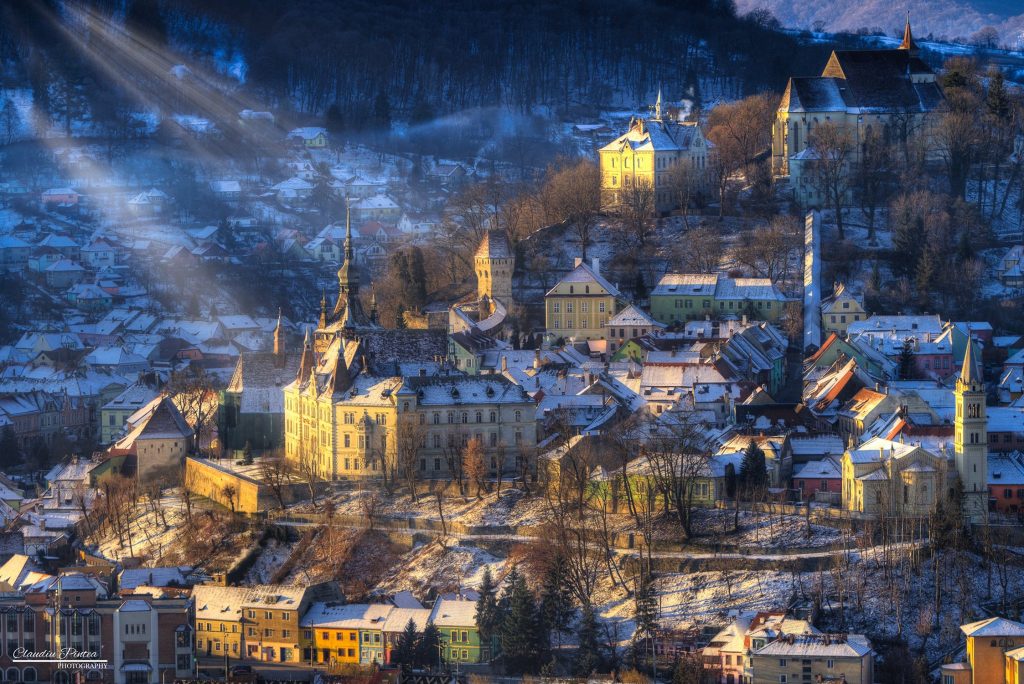 After leaving Sighisoara, we will head to Biertan, to visit the fortified church. Raised in the 16th century, in the late gothic style, the church is part of one of the most complex defence systems in rural Transylvania: 3 layers of defence walls, bastions, towers. Inside the church, the visitors can admire the largest polyptych altar in Transylvania and an interesting collection of Turkish carpets and guilds flags. Moreover, the lock of the sacristy door, made in 1515 is an example of the local locksmiths’ craftsmanship, securing the door to the wall in 15 points. 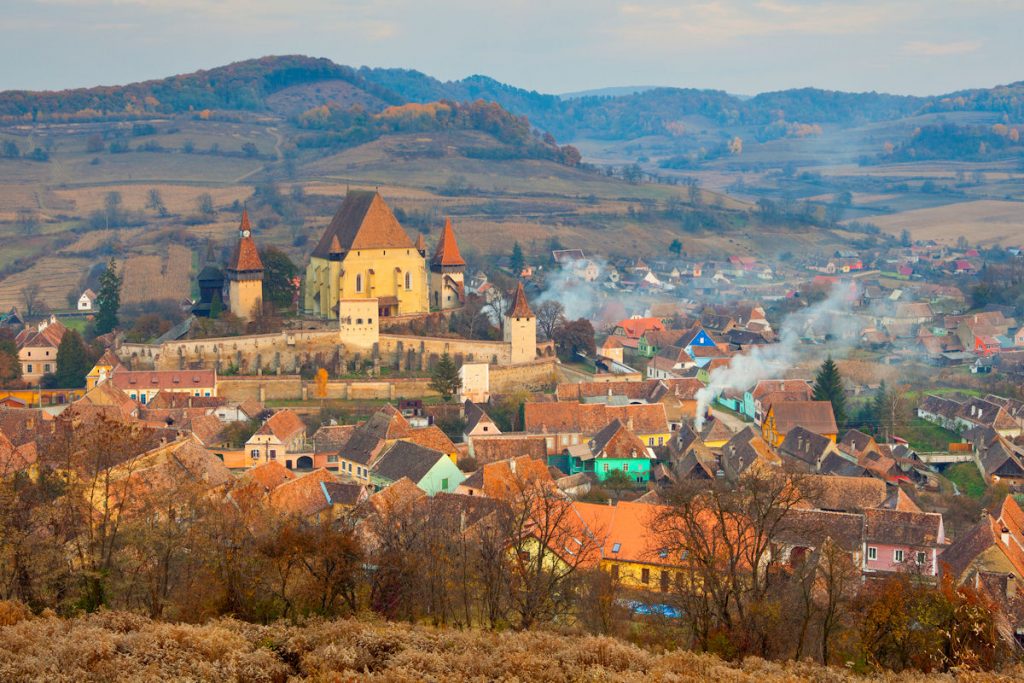 At the end of the day, we will arrive in Sibiu, where we will spend the night.
Distance: 240 km, driving time: 3.5 hours

Today we will visit the largest gothic castle in Transilvania: Corvin Castle. Built in the 15th century, the castle was the residence of the governor of Transylvania, Ioan Corvin and his son, Mathias Corvin, who was one of the greatest kings Hungary had. Perched on a rock, the castle impresses visitors from first sight with its drawbridge laid over a rushing river, the gothic decorations of the windows or the pointing towers. 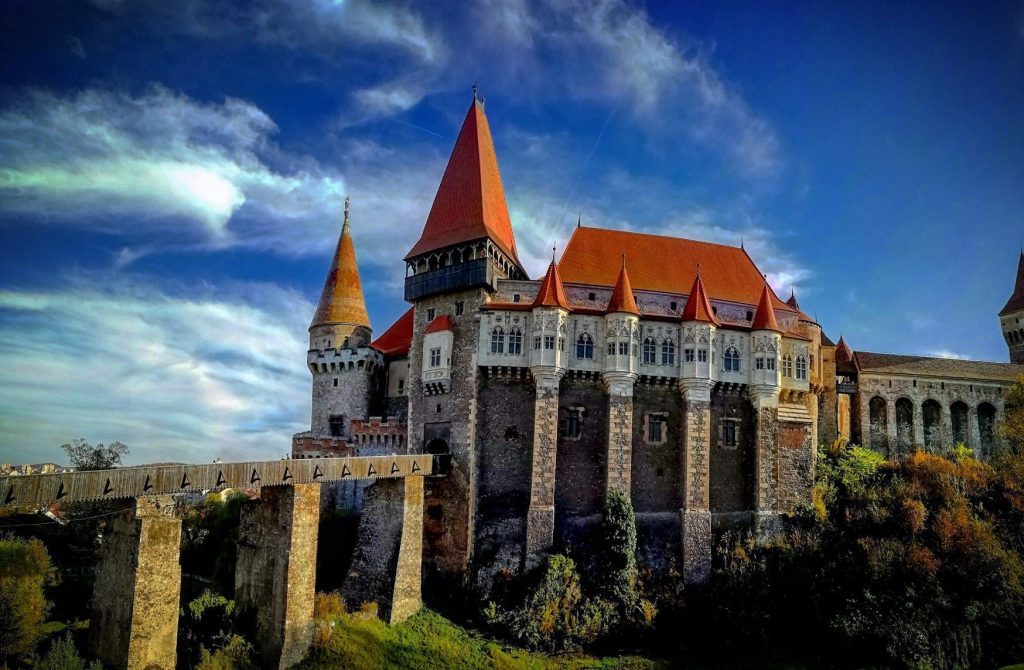 After visiting the castle, we will return to Sibiu, where we will dedicate the afternoon to exploring the old town. During the guided walking tour we will see the most important touristic attractions and architectural sights: The Lutheran Cathedral, the Liars Bridge, the Small Square, the Council Tower, the Large Square and the medieval fortifications. If time permits, and you’re interested, we can have a tour of the farmer’s market, for an introduction on Romanian vegetables, fruits, spices, cheese and meat cuts. 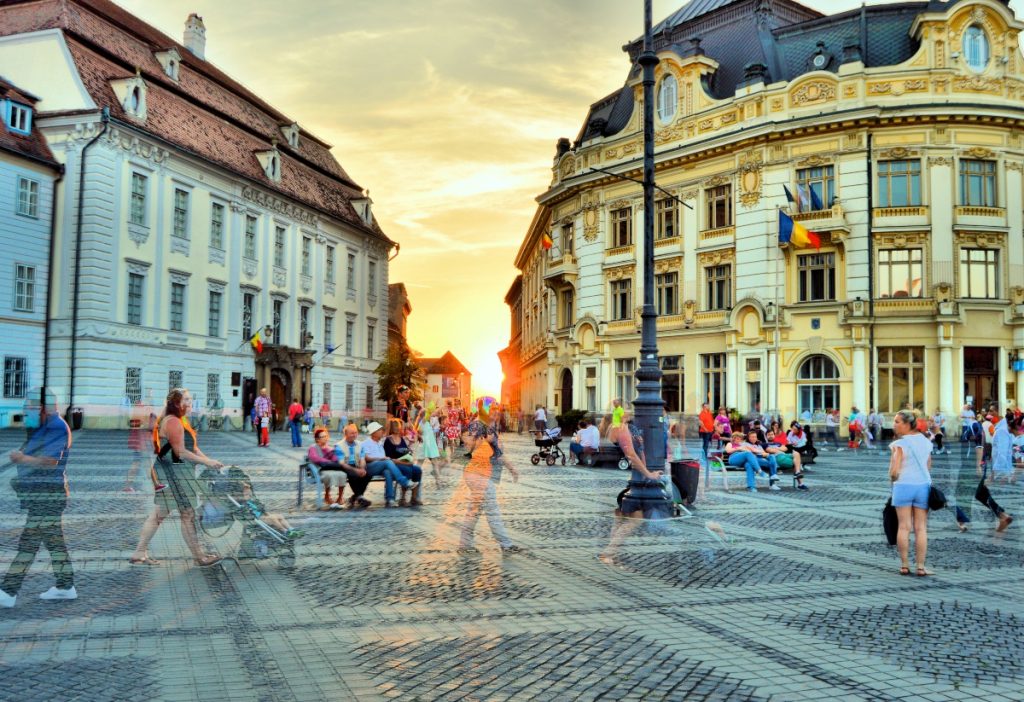 The summer vibe in the Large Square of Sibiu

The last day of our tour of Transylvania will take us to the roof of Romania, on the Transfagarasan road, at 2000 meters altitude. The road is crossing the Carpathian mountains from north to south and gives us the opportunity to admire the stunning alpine views, countless waterfalls and rushing streams. The ride is an experience in itself, with hundreds of hairpin curves and scary ravines on the side of the road. We will stop many times to admire the scenery and breath the pure fresh air. One longer break will be at Balea Lake, where we will have a short walk around the lake to capture the best view of Transfagarasan from 2000 meters.

After reaching Balea Lake, we will return back on the same road, and continue our trip to Brasov, at the end of our program. Depending on our guest’s plan, we can also end the trip in Bucharest or Sibiu. 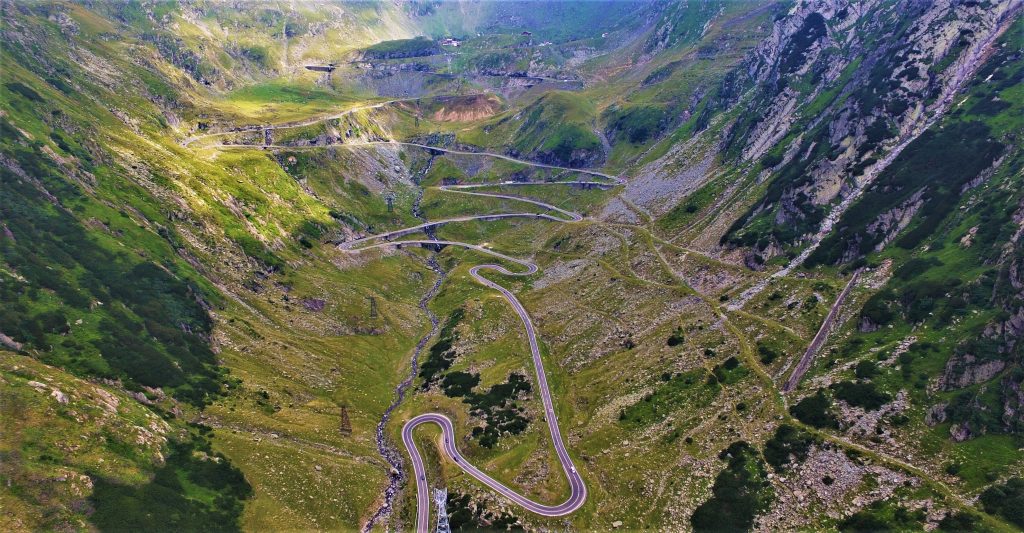 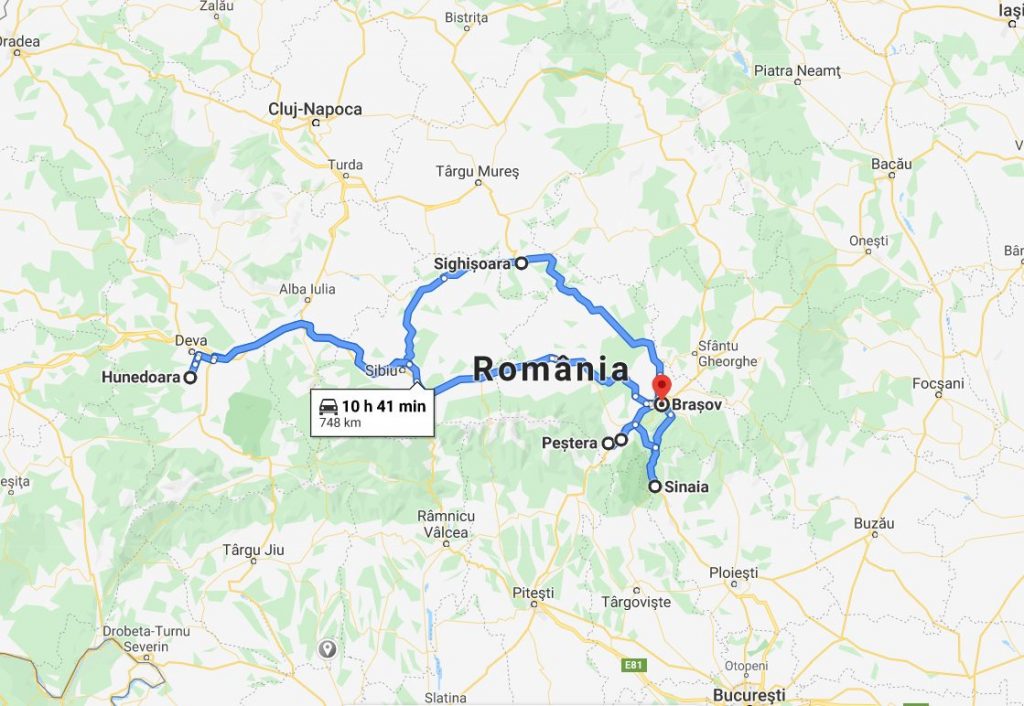 *for groups larger than 8 persons, please ask for a customised offer

€350
Per Person
This tour's been viewed 338 times in the past week
Share this tour
2023 © Copyright Romania Guided Tours Travel Agency, owned by Oak Tree Travel SRL