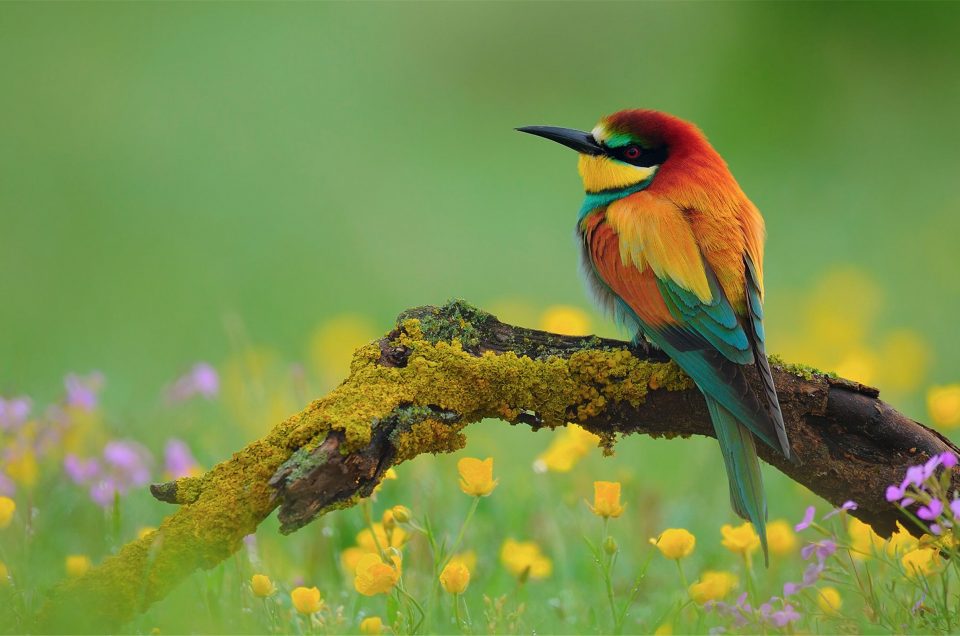 Romania has one of the largest natural habitats in Europe, being the home of 98% of Europe’s bird species. The largest concentration of birds in Romania can be seen in the Danube’s Delta, a bird paradise, but a trip in nature elsewhere in Romania will delight the visitor with a show of sounds and colours. You only need a pair of binoculars or a camera with good lenses, some luck and the lead of a good tour guide. So, for birds lovers, we have put together on this post our list with the most beautiful 8 birds that can be seen in Romania, in their natural habitats.

The first place on the list was not hard to win. The bee-eaters, through their brightly coloured plumage, easily distanced themselves at the top of the list. Whoever has the chance to meet them has the impression that they are more at the tropics. And the truth is not far: these beautiful birds winter in Africa, arriving in Romania in May when they lay eggs and raise the chicks, just to migrate back in August.

Their plumage seems to be taken from the colors of the rainbow: shades of turquoise, blue, green, combined with shades of intense yellow, red and brown.

There are birds that feed on insects: bumblebees, wasps, bees, butterflies. The scientific name ( Merops apiaster ) indicates their diet, apiaster meaning “bee eater”. In fact, in Romanian, we can find it under different regional names, obviously related to its menu: bee plague or bee-wolf.

The bee-eaters prefer plain and hilly areas with sunny slopes. The nests are most often made in the sandy banks of rivers or in exposed areas of sand on the slopes of hills. With the help of his long beak, they dig tunnels a few meters long, at the end of which there is a room used for nesting. There are birds that live in the colonies. The birds are monogamous and during the mating ritual, the male offers the female gifts: insects to eat.

The European roller is a medium-sized bird, similar in this respect to the western jackdaw: the size of an adult reaching 30-32 cm with a wingspan of 66-73 cm. It has an intensely coloured plumage, the predominant colours being shades of turquoise, green, blue. The ends of the wings are black, and on the back, we can see shades of brown.

The etymology in Romanian (groove) probably has to do with the nesting places, the bird preferring both the clearings at the edge of the forests, as well as the pastures or hayfields. The nest is built either in the hollows of trees or in the steep banks of loess. The scientific name comes from the sounds emitted by bird, close to those emitted by the raven (from the Greek korakisas – similar to the raven). Garullus comes from Latin, meaning mouthful, flickering.

It is a migratory bird, spending winters in sub-Saharan Africa. The bird returns to Romania at the end of April, to stay until the end of August. It lays between 3 and 6 eggs that both the female and the male brood. The chicks know a very fast development, being able to leave the nest after 25-30 days from birth.

The common kingfisher is a small bird (17-25 cm with a wingspan of 24-28 cm) if we compare it with other fish-eating birds and with a brightly coloured plumage. Blue dominates here too, the shades ranging from cobalt blue to turquoise. On the chest, we can identify shades of reddish-brown with a few white spots. It has the shape of a small torpedo, which allows it to dive almost vertically into the water in search of prey.

It feeds on small fish and other insects, crustaceans or tadpoles it finds on the surface of the water. It prefers clear and smooth waters, which allow it to easily identify its prey from the height of an observation post. The common kingfisher winters in our country, but in the case of severe winters, it can move further south, where it can find water that does not freeze.

The Blue Gull is very territorial. It onsumes 60% of its body weight daily, so it is essential to be in control of it own piece of water. It is solitary for most of the year, sheltering itself in the thickets. They form pairs in autumn, but each bird retains a separate territory and generally, territories are not united until spring. The eggs are hatched by both partners, and the chicks are expelled from the nest after 3-4 weeks when they are able to procure their own food.

The blue tit is a small bird with rich colouring. The top of the head, the wings and the tail are blue, the back is green and the abdomen is yellow.

It is a bird that stays in our country all year round and feeds in summer on insects, larvae, spiders, caterpillars and small invertebrates, and in winter on fruits and seeds. In spring it consumes extra flower nectar and sometimes sap from some tree species. It is a curious bird that does not avoid man-made areas.

The tit is a very widespread species in deciduous forests up to altitudes not exceeding 1000 m, but it does not avoid mixed forests, gardens, orchards and parks inside the towns. The blue tit is a monogamous species. Males can be polygamous, having several partners in the same territory. It usually lays 7-13 eggs, which the female hatches (the male taking care to bring food to the nest). It is a solitary bird that lives in pairs or in autumn in small family groups. They do not migrate, but in autumn and winter they move to areas with abundant food sources and sometimes gather in larger groups.

Although it is a shy bird, the golden oriole can be seen with a little patience near the cherry orchards, in the menu of this bird being, in addition to insects, fruits, especially cherries (it may have been found the costs one kilogram). We do not know the connection of these birds with the other meaning of the word in Romanian, that of a man with an important function, but we know that the golden oriole has no chief tendencies at all.

The male has an intense yellow plumage, with black wings and tail, the female a greenish colour, with a darker tail and wings. The scientific name “oriolus” was first used in the 18th century and is derived from the classical Latin “aureolus” meaning golden. The body length is 22-25 cm and the wingspan is 30-35 cm and the weight is 50-60 g. In Romania, it lives in small forests near rivers or in lowland forests, climbing on the valleys of mountain rivers, to their middle part. It is a migratory bird that only nests in the country, spending the winter in Africa. During migration, the golden oriole only flies at night, and usually returns to the same nest.

The nest is built by the female and is similar to a hammock, often hanging from fork-shaped branches. The nest has a cup shape of 12-15 cm, it is built of reed, grass, moss, pieces of cloth, paper, tree bark. On the inside, it is lined with feathers or woollen threads and horsehair, when available.

The common chaffinch is a small to a medium-sized bird, the length of the body being between 14-16 cm with a wingspan of 24-28 cm. The male has a colourful plumage, with the top of the head and the neck blue-grey, the lower part of the body brown to reddish, dorsal, between the wings we find shades of olive green. It has white, wide stripes on the wings, while the female has a more faded, grey-brown colour.

It builds its nest in forests, parks with abundant and mature trees, sometimes in alignments of trees or on forests along rivers. It is found both in coniferous forests and in oak or poplar forests in the lowlands.

The common chaffinch is a partially migratory bird. While females and young specimens fly to warmer areas in late summer, males usually stay in the country over the winter. Hence the name coelebs (bachelor).

The common chaffinch has a varied diet, from small invertebrates and their larvae to seeds and buds. The chicks are fed on invertebrate larvae.

The common chaffinch is a monogamous bird. The male attracts the female by strong chirping and displaying richly coloured plumage. After mating, the female builds the nest hidden in the upper canopy of the trees. Only the female hatches, the male taking care of the eggs only when the female leaves the nest to feed. After hatching, the chicks are fed by their parents only on insects.

The European goldfinch is a small bird in the finch family with a beautifully coloured plumage. The wings are black with yellow inserts, on the back we find shades of brown, and on the head, around the beak, the goldfinch has a red spot.

In Romanian slang, a cop is also called goldfinch ( (sticlete). It appears that the connection between this bird and the police personnel is related to the past uniform of the latter, which had elements of deep red.

The scientific name – Carduelis – is the Latin name for some species of thistles – Carduus – referring to the feeding behaviour of goldfinches in winter when they can be seen in large groups on these plants.

It is a bird that usually stays over the winter in Romania and nests in forests, parks with abundant trees, orchards and gardens, tree alignments or small forests along rivers. It occupies any kind of semi-open habitat, including human-inhabited areas.

It has a predominantly vegetable diet, feeding on buds, flowers or fruits, and in the cold season especially seeds and dried fruits.

The Eurasian jay is a medium-sized bird (32 – 35 cm) with a wingspan of 54-58 cm, from the Corvidae family, along with crows, ravens, or magpies. Unlike its relatives, the jay has a much more pastel plumage, dominated by brown tones, with deep blue and black inserts in the middle of the wings.

They have a varied diet, from acorns, nuts and other seeds to fruits, invertebrates, eggs, chickens and small mammals. It is a bird that reserves food for the winter (especially seeds, acorns, nuts) in holes or buried in the ground, this habit contributing to the spread of some plant species. Jays are sedentary birds and can be seen all year round in Romania.

In general, in the case of jays, the partners stay together all their lives. The nuptial ritual involves displaying the plumage on the wings and tail, and the male provides food to the female. Together they build a nest of sticks in a bush or tree.

The jay is considered a bold bird. It signals its presence through loud sounds that mimic birds of prey (eagles and hawks), but sometimes also emits a kind of meow. The cries of the jay often announce the presence of an animal or bird of prey and signal to other living beings the existence of danger.

This is the ranking of our preferences, and the list can be enriched with new birds as we discover them. Some of the birds presented above can be observed, with little luck, during our nature trips, such as Romania walking tours, or the Guided walks in the Romanian countryside