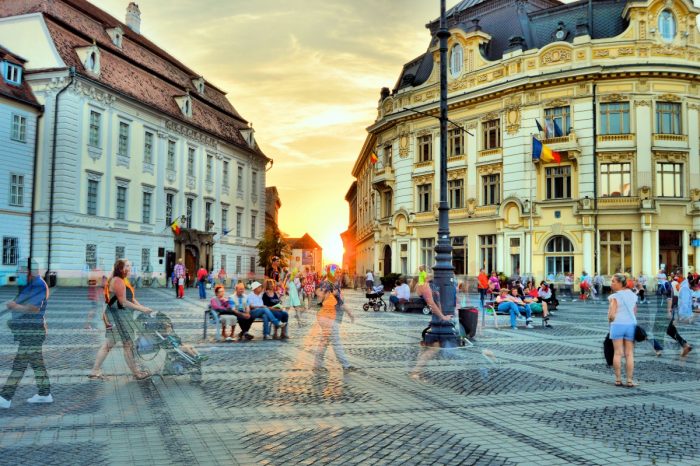 The private Transylvania tour from Timisoara is perfect for travellers who are starting their trip to Transylvania from western Romania. 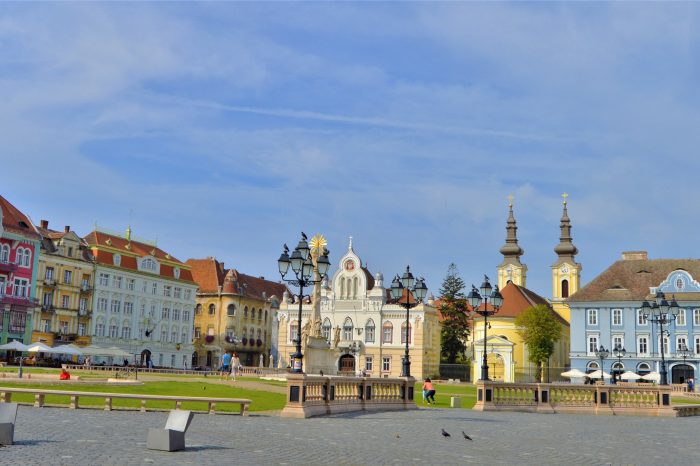 The private tour of Romania from Timisoara

Timisoara – the lovely Romanian city with a Viennese flavour

The unofficial capital of Banat, Timisoara is an architectural gem, the heritage of continuous evolution in the last 3 centuries. But Timisoara has a much more longer and captivating history. In medieval times it was for 8 years the capital of Hungary. Later, starting the 16th century, Timisoara was a military stronghold inside the Ottoman Empire for 164 years. Then, it was conquered by the Austrian armies after a fierce siege. The Austrian administration rebuilt the city and laid a new modern fortress around it. This is the moment when the first architectural masterpieces were erected. Since then, Timisoara architectural patrimony was enriched with Baroque, Secession or eclectic elements. This is probably one of the reasons Timisoara was designated to be the European Capital of Culture in 2021. 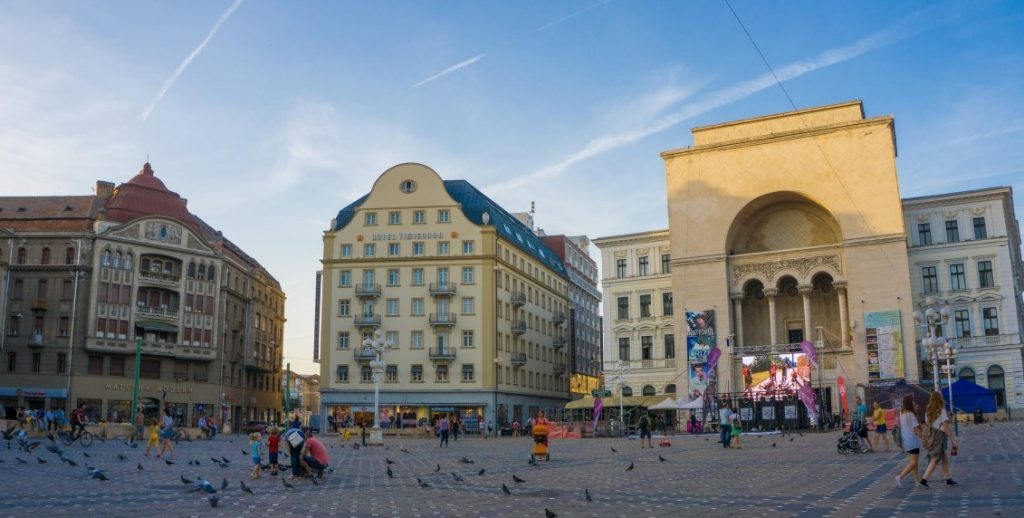 Geographically, Timisoara is located in the west of Romania, in the Banat region, at almost 3 hours drive of Budapest or Belgrade. Timisoara is one of the biggest cities in Romania, with a population of more than 320.000 persons, almost equal to Cluj-Napoca. It’s Romania’s one of the main university and economical hubs. And, it’s also the city where the anti-communist Revolution started in December 1989.
At the beginning of the 20th century, Timisoara multiethnic reports were showing a German population representing almost 50%, followed by the Hungarian and Romanian population. The Germans were brought in Timisoara and Banat region by the Austrian administration in its efforts to develop the area, which had suffered from years of wars and diseases.
Nowadays, Timisoara maintained its multiethnic character, but the reports changed dramatically: Romanian population counts for 80% of the population, while the Hungarians are representing around 5%. German and Serbian minorities are around 1% each of the total population of the city.

What to see in Timisoara

The main tourist area of Timisoara is the citadel district, with its 3 large squares and the largest concentration of historical buildings.
Any tour in Timisoara should include Union Square, the largest open square in Romania and probably the most beautiful one. The wide-open space is surrounded by pastel-coloured Baroque and Secession style buildings. One of the landmarks is the Catholic Dome, from the east side of the square, raised in the 18th century in Viennese baroque style. The architect, Joseph Emanuel Fischer von Erlach, designed also the plans of several other palaces in Vienna, including the monumental hall of the National Library, part of the Hofburg Palace.

On the opposite side of the square lies the baroque Serbian Orthodox Cathedral, next to the Serbian Episcopal Palace. Initially raised in the baroque style in the 18th century, the facade was redesigned in 1911 with Serbian decoration elements.
On the south side, near the Baroque Palace which is right now housing the Art Museum, one can find one of the most instagramable buildings in Timisoara: the Bruk house. Built in Secession style at the beginning of the 20th century, the building was given a much-needed restoration a few years ago. Nowadays is catching the eyes of the visitors with its elegant decorations and vivid reddish-turquoise paintings.

Our tour of Timisoara will continue with a walk to the south side of the historical district, passing through the Liberty Square. Located between Union Square and Victory Square, smaller in size, the vibe is less flamboyant than the colourful Union Square. The buildings surrounding the square are having a more austere style, due to the fact that some of them were used by the military. The last renovations of the square revealed interesting structures from the Turkish times of Timisoara: the baths. The ruins of the hammam are covered now by pavement, laid in several concentrical patterns converging in the baroque statue of Saint John Nepomuk, in the centre of the square. Pay attention while crossing the north side of the square: tramways painted in the white-purple, the colours of the local football team, are passing regularly. One of the corners of the square is also the station of the touristic tramway, which is offering an on the wheels tour of Timisoara.

Walking further south, we will reach Victory Square, the longest and the newest large square from the area of the former fortress. On the north side of the square lies the Opera Building, with its facade resembling a triumphal arch. Besides the opera, the building is also housing 3 different theatres: The Romanian, German and the Hungarian. The Opera building is one of the symbols of the anti-communist revolution from 1989. From the balcony of the Opera, in front of hundreds of thousands of protesters, Timişoara was declared “the first free city in Romania” on December 20, 1989, the theatre being symbolically linked to the collapse of the last dictatorship in Romania in the 20th century.
On the opposite side of the square, one can see the tall silhouette of the Orthodox Cathedral. Built between 1936 to 1946, in a style inspired by the churches from Moldova, the church dominates from its 90 meters hight the southern part of the citadel district. 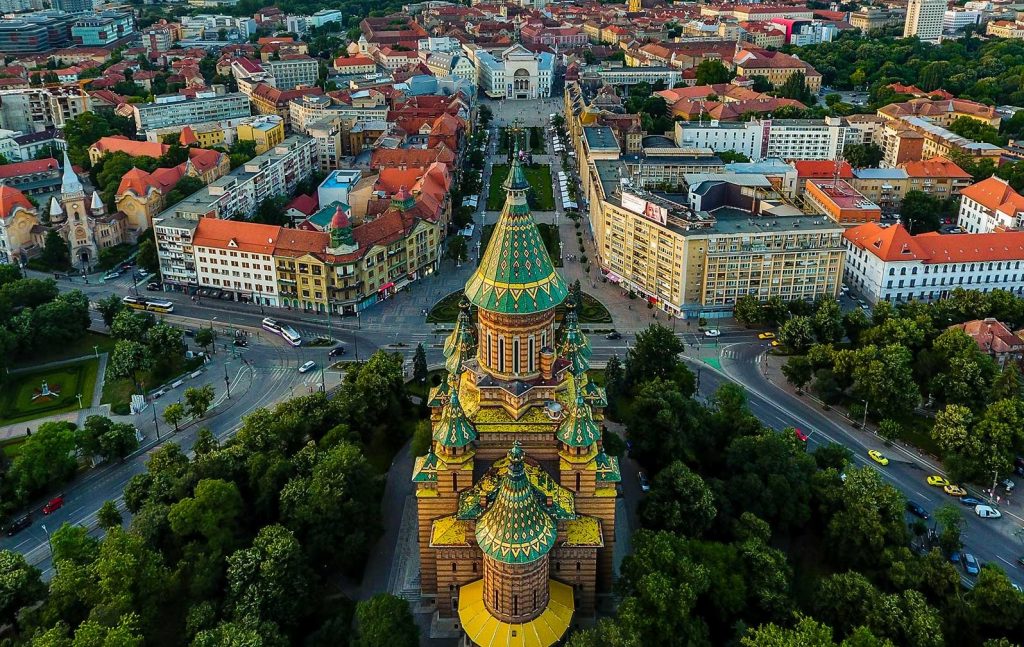 Timisoara is the only city in Romania having public water transport. So, for an atypical tour of Timisoara, there is no better way than taking the small boat and admire at a slow pace the city surrounding the Bega channel banks. There are 9 stations, and the closest one from the citadel district is just a few steps from the Orthodox Cathedral. 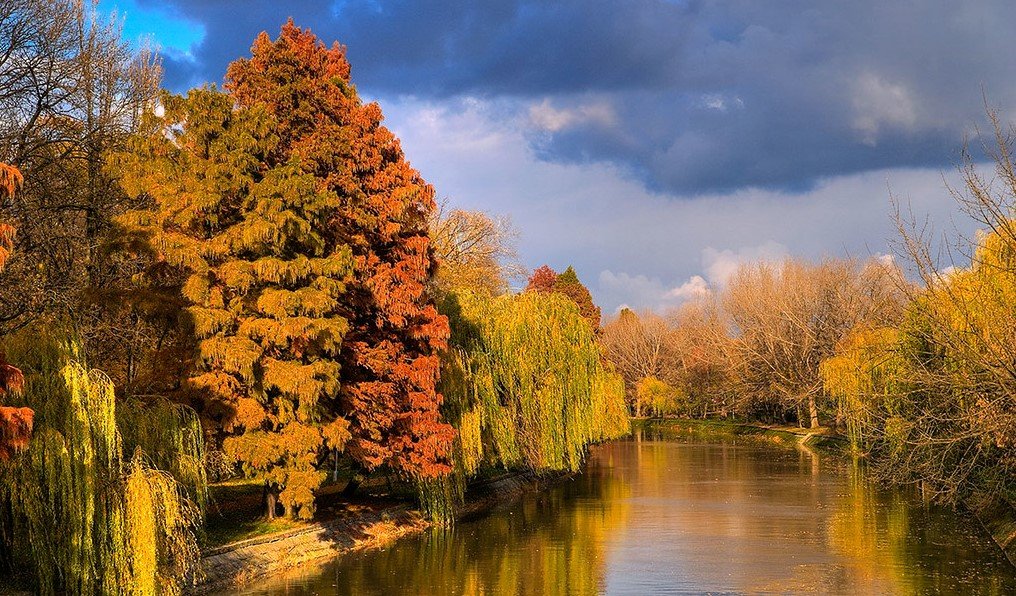 What to do in Timisoara

Timisoara is a perfect destination for a weekend getaway. But if one wants to spend a few days more in Timisoara, and wants to explore the are from the city, here are our suggestions for the best day trips that can start in Timisoara.
First, as we mentioned, Timisoara is just 3 hours from Budapest and it can be a good connecting city for someone willing to visit the Hungarian capital after touring in Romania. Second, Belgrade is also quite close, so again, Timisoara can be the starting point for visiting the Serbian capital.
The other 2 important cities from western Romania, can be reached in a day trip from Timisoara: Arad and Oradea. If Arad is just one hour drive from Timisoara, Oradea is around 2.5 hours away.
For ones planning to explore the natural touristic attractions from the area, Timisoara is the best-placed city for a day trip to the Iron Gates, the canyon dug by the Danube, on its way to the Black Sea. Another option would be a tour in nature, in the beautiful Nera-Beusnita National Park. There a lot to see in the area: Bigar waterfall, Ochiului Beiului Lake, the watermills from Rudaria river, or a ride on the oldest train line in Romania: Oravita – Anina. 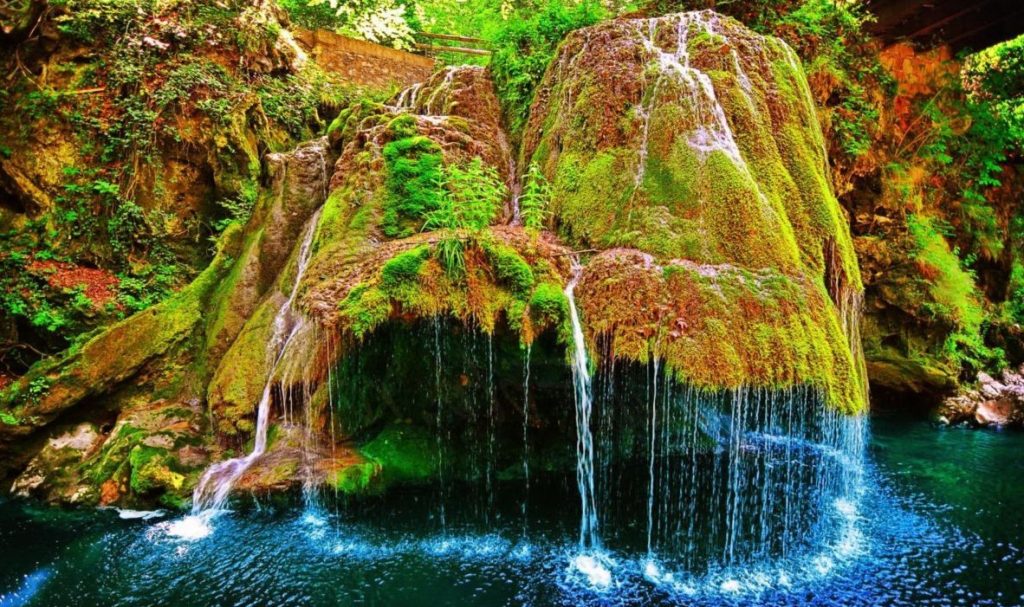 How to get to Timisoara.

There a few options. The easiest way is to fly directly to Timisoara. The international airport has good connections with a large number of destinations in Europe, and if you don’t have a direct flight from your town, you can reach Timisoara using those connecting airports.
If one wants to have a tour fo both Romania and Hungary, Timisoara is a good hub to connect the 2 countries. Budapest is jut 3 hours drive from Timisoara, and by train, the ride is around 6 hours.

Where to stay in Timisoara

As the citadel district is the most attractive part of the city for tourists, choosing accommodation in the area sounds like a good idea. The offer is generous and varied: from comfortable airbnbs at reasonable prices to upscale 4 stars hotels. Finding a place to park in Timisoara is not an easy task, and the parking place usually comes with a cost, so, when you look for hotels, choose the ones offering free parking. If you don’t mind using public transportation or walking a little bit longer, accommodation facilities which aren’t very central are usually offering better deals.

What to eat in Timisoara

The Banat gastronomical landscape was shaped over centuries by the historical conditions and geographical context. The food in Timis county is the result of an original mix: ingredients from the Banat terroir prepared using elements from of Austrian-Hungarian food culture, combined with the one of the Germans arrived there in the 18th century and influenced by neighbouring Serbian and Hungarian gastronomy.
The dishes prepared in Banat are made mostly of pork, chicken or beef, with vegetables fried in lard or oil, with sauces of flour, to make them more consistent, seasoned with pepper, thyme, bell pepper or caraway. The cuisine of Banat is characterized by fatty, nutritious and tasty foods.
The soup (zupa) is one of the quintessential Banat dishes and is prepared with homemade noodles, made by housewives from eggs and flour. For a clear golden soup, rooster or hen parts had to simmer for a few hours with root vegetables a and onion.
The noodles are not only used in the soup but can be an ingredient for almost every dish: from pasta-like dishes (with bacon or cheese for example), mixed with cabbage, or for deserts.

The cabbage rolls (sarmale), a Romanian cuisine classic, is also a little bit different in Banat. Meat is minced by hand, with a chopper, and the rolls are bigger than usual, fist-size.
A popular dessert is the plum dumplings, a heritage from Austrian-Hungarian cuisine. The plums are covered by a simple dough, made of potatoes and flour. After boiling them for a few minutes to cook the dough, the plum-dumplings are finally covered with a mixture of sweet breadcrumbs. 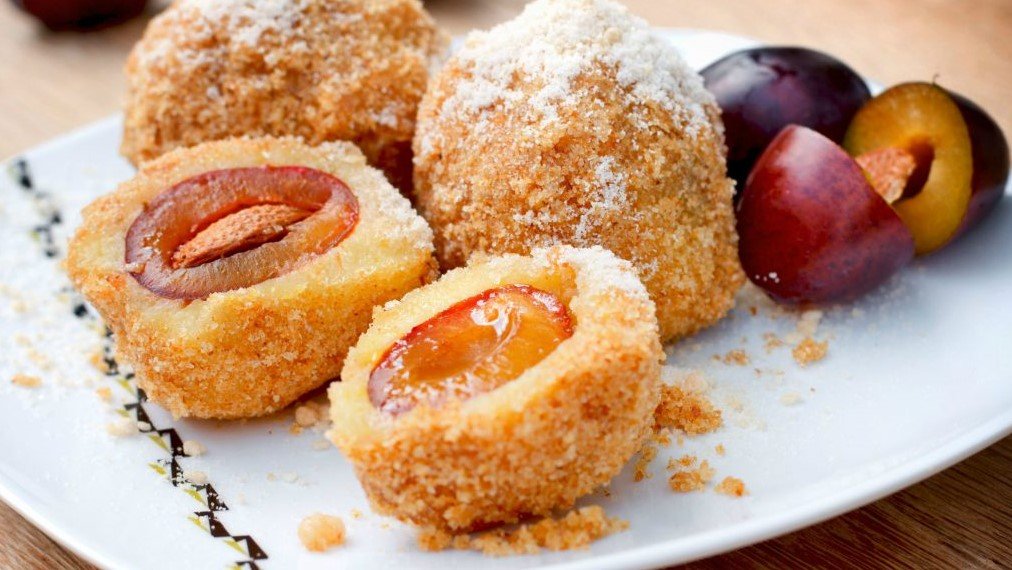 Where a foodie can find those dishes in Timisoara? Starting in the citadel district at “Calul Alb” one can find there the delicious soup we mentioned before. If you are there, we recommend also the mangalita pork confit, comfort food from all over Romania, and for dessert, a treat with a strange name: “the bird’s milk”. It’s a delicate vanilla custard that makes every Romanian thinking about childhood.
The Vienesse heritage in food can be found at Cinqueterre, not far from Calul Alb. Tafelspitz, the boiled beef with vegetables, the favourite dish of the Austrian emperor, Franz Joseph, can be found in the menu, among other dishes from 5 continents, hence the name of the restaurant.
Good evidence that Serbian food is not that different from the Romanian food is the Dinar restaurant. Its menu is filled with hearty dishes from both cuisines. One can find there the grilled minced meat delicacies: Serbian “plieskavita” and “cevapcici” or the ubiquitous Romanian “mititei”.
The menu from Casa Bunicii restaurant (Grandma house) is probably the best matching of the Banat cuisine: one can find there the clear soups (zama), homemade noodles (spatzle) with different sauces and for dessert, the plum dumplings (gomboti) or the oven-baked pancakes filled with sweet cheese (scoverzi).