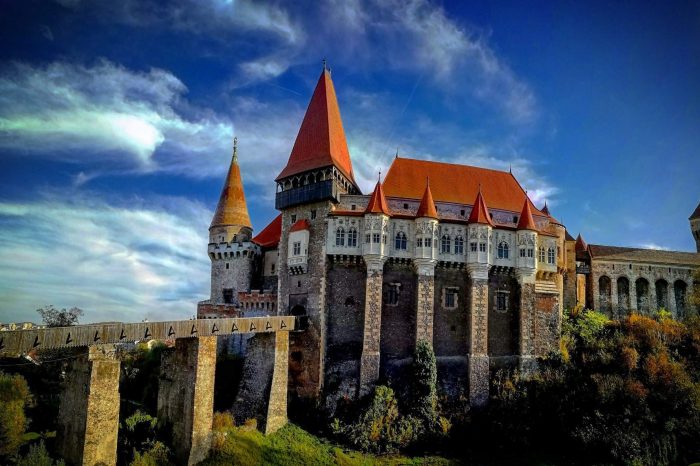 Tour of Transylvania and Maramures from Cluj-Napoca

The private tour of Transylvania and Maramures starting from Cluj-Napoca. Explore Sibiu, Brasov and Oradea, visit Corvin and Bran Castle, admire the best mountain road in the world and witness the rural life in Maramures 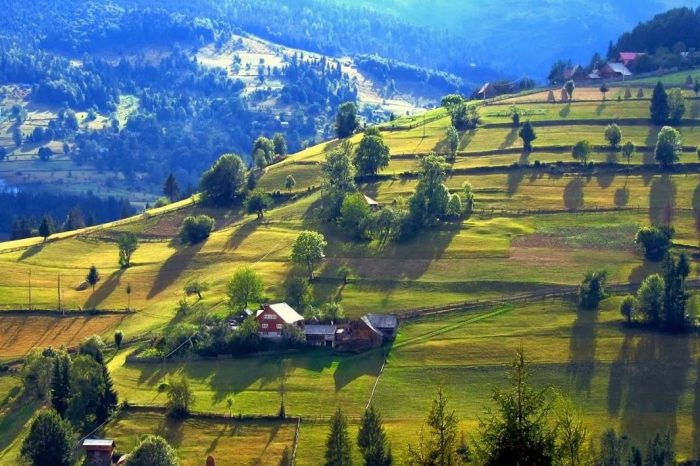 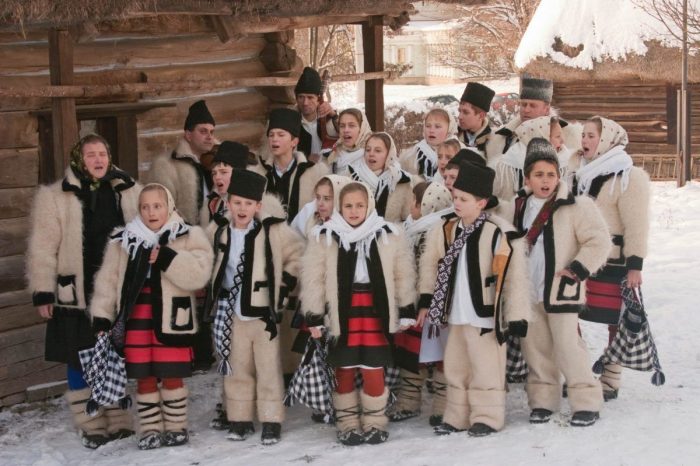 Romania walking holidays, a private small group tour: discover Romania actively, hike in the mountains, walk in the countryside, meet the people and enjoy the local cuisine. Travel around the country choosing our bespoke itinerary …

Maramures, an idyllic land, trying to keep its unaltered traditions and modus vivendi under the pressure of modernity. Archaic elements like wooden buildings, horse-driven carts, haystacks, vivid traditional costumes are blending in an original puzzle with modern elements brought by globalization. 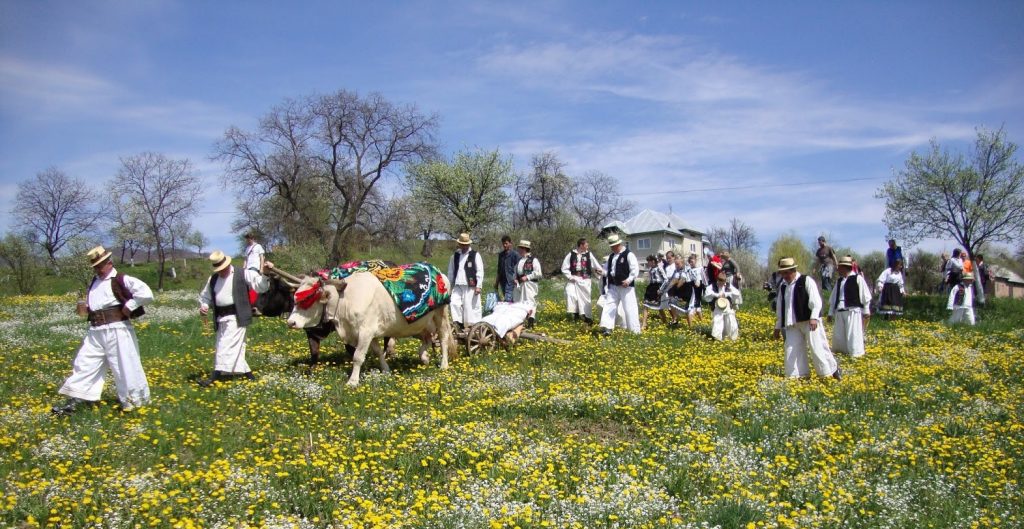 What to see in Maramures

The best tours in Maramures should include at least those elements:

People: We put as number one on our things to see in Maramures its people: tough and frank on one side, but warm and loyal on the other side. To get the real spirit of Maramures, one should try to meet its people. Don’t limit just to a hurried visit of Maramures. Take your time to wander the villages, meet the locals, watch their daily routine, book a night or two at a rural guesthouse. Observe them going to church, proudly wearing the traditional costume, or if you are lucky, a community celebration like a wedding or a christening party. 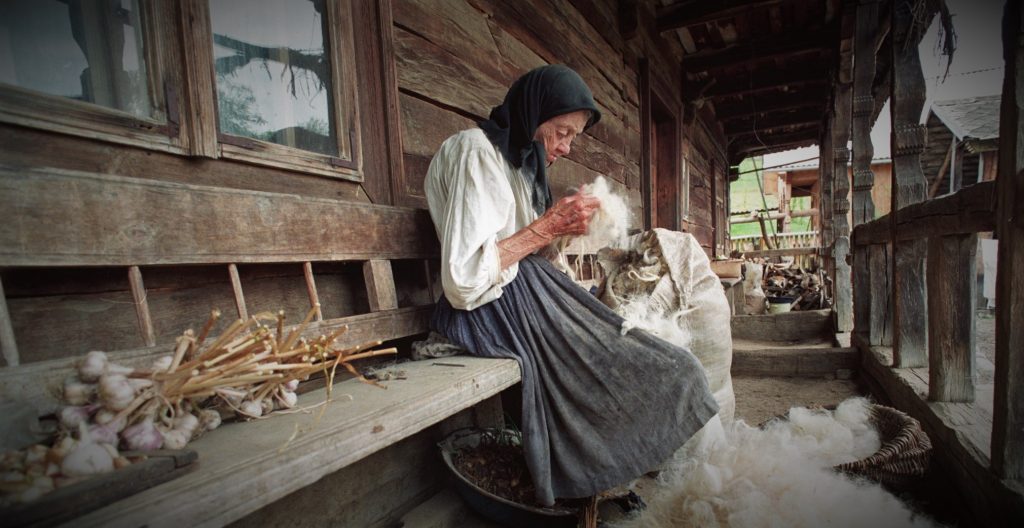 Countryside: Well, this is what Maramures is renowned for. Traditional villages in a bucolic natural setting, village people and their rural culture. Maramures is considered one of the last remainings of traditional rural life in Europe. It can be seen it as a snapshot of the continent as it was a century ago – although things are slowly evolving with the influx of cars (to replace the horse-and-carts), ugly concrete buildings and smartphones. Most of Maramures villages are located along river valleys, surrounded by rolling hills covered by farmland, meadows or forests. In the summertime, haystacks are dotting the fields although mechanised mowing and rolled bales started to appear as well.

Art of wood. Being a foresty area, wood was an abundant resource, used intensively. From the smallest house to churches with tall bell towers or to richly decorated gates, everything was made of wood. Relying that much on this resource, the wood artisans of Maramures transmitted their art from one generation to another. They have refined it and hide in intricate decorations profound philosophic concepts. One of the best examples of wood art in Maramures is the gates. Once a sign of social status, the Maramures gates are a rustic triumphal arch having the role to protect and purify the household from the outside world. 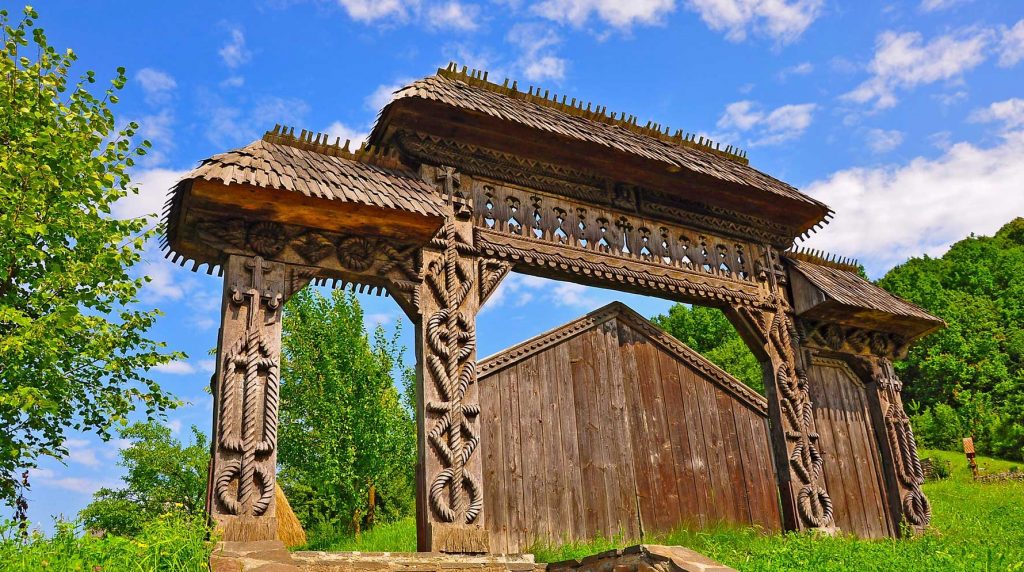 Wooden churches.Maramures villages are distinguished by their original wooden churches with tall spires and shingled roofs. They weren’t designed to impose or dominate, like the stone cathedrals in cities, but to harmonize and blend with the rural background. Over 100 of them are considered historical monuments. Of these, eight are listed in the UNESCO World Heritage Site: Bârsana, Budești, Desești, Ieud, Plopiș, Poienile Izei, Rogoz, Șurdești. These eight churches are exceptional examples of architectural solutions and naive art from different periods and areas. They show different designs and techniques used to build narrow, high, timber constructions with their tall, slim clock towers.

The Merry Cemetery: it’s undoubtedly an oxymoron. Normally there is nothing “merry” about a graveyard. Not for Maramures people. They are tough and brave people, death doesn’t scare them. Actually, they mock death. They see it as a normal stage in the cycle of life, so, The Merry Cemetery in Sapanta is another symbol of Maramures culture.
The wood masters in the village are decorating the crosses with epitaphs, and paint them with vivid colours on a blue background. In a few words, written in an anectodical style, we find more about the life of the defunct. 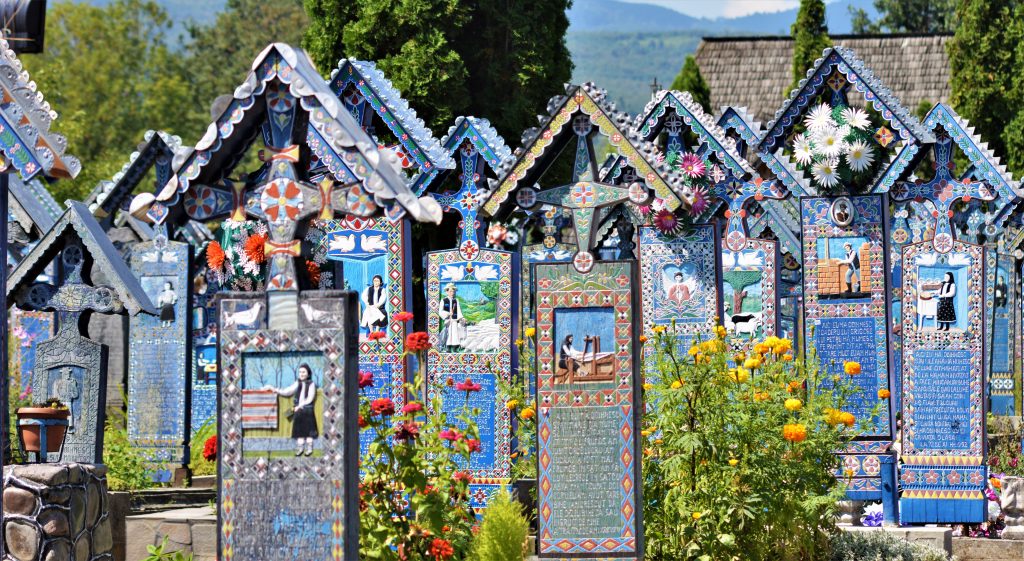 The steam train of from Vaser River Valley is an experience every visitor should consider while having a tour in Maramures. Nowadays, there just a few remaining steam trains in Europe. The one in Maramures is unique as it takes the visitor deep in Carpathian mountains wilderness. The 24 kilometres long tourist line was initially opened a century ago for logging. It follows the sinuous Vaser River Valley for about 2 hours each way, giving the visitor the possibility to admire from the swinging wagons the beauty of the mountainous scenery. At the end of the tourist line, visitors are having the possibility to try some local dishes, while admiring a folkloric show of music and dance. Before starting the journey, prepare yourself: there is no Internet coverage for about 5 hours, the length of the train ride. 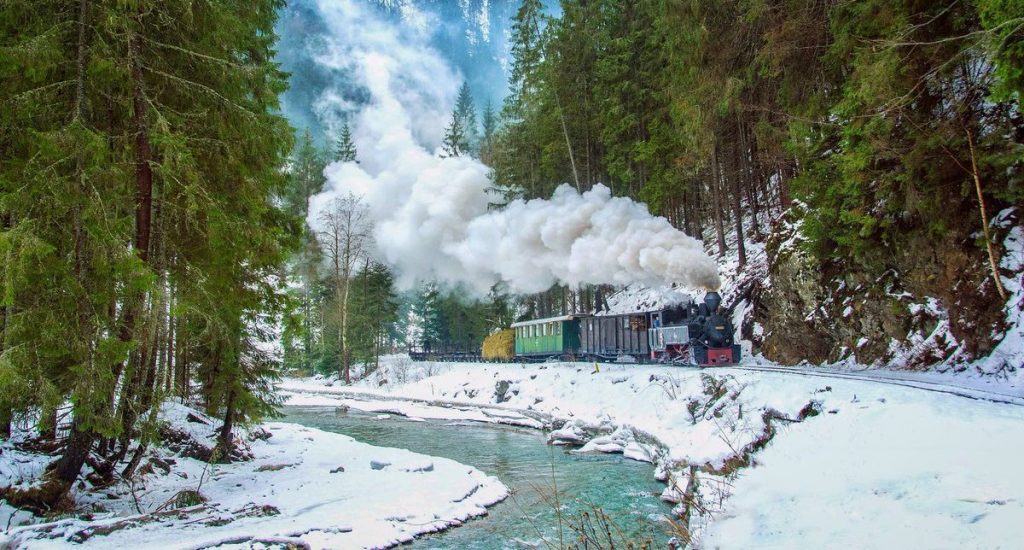 The Sighet Memorial is the evidence of one of the saddest page of Romania’s history. After the WW2, Romania was under Soviet Union occupation who put a puppet government, controlled in the background by the Soviets. One of the first steps to thoroughly control Romania was the imprisonment of any person which may pose a problem for the new regime. On May 1950, over one hundred former dignitaries from the whole country were brought to the Sighet penitentiary (former ministers and other politicians, as well as academics, economists, military officers, historians, and journalists), some of them sentenced to heavy punishments, and others held without any form of trial. They suffered violent treatment and harsh imprisonment conditions. A lot of them died in prison.
Today, the former prison is a memorial to the victims of communist regimes. It provides insights on the oppression by communist regimes in Europe throughout the 20th century, including the resultant death and suffering endured inside and outside the prison.

How to get to Maramures.

There 3 options, if you plan to arrive in Maramures by plane. The closest big international airport is Cluj. The distance from Cluj to Maramures can be covered in around 3 hours. Maramures has its own airport, Baia Mare, but at this moment is connected only with Bucharest. Satu Mare airport is just 1.5 hours away from Maramures and it has connections with Bucharest and London.
If the trip in Maramures is part of a bigger journey in Romania, the usual entry route is through Cluj. Maramures is bordered by Transylvania in the south and Bucovina in the east. So, an optimal route for a long trip in Romania, can start in Transylvania, continue to Maramures, through Cluj and then, on the final stage, it can reach Bucovina.

Where to stay in Maramures

Here is rather simple. While having a tour in Maramures, the accommodation should be a rural guesthouse in a quaint village. Breb is probably the most popular village, but the charm of Maramures can be found everywhere, from Sapanta to Borsa. Our preferred type of accommodation is traditional wooden houses transformed in rural guesthouses, like the one in the photo below: 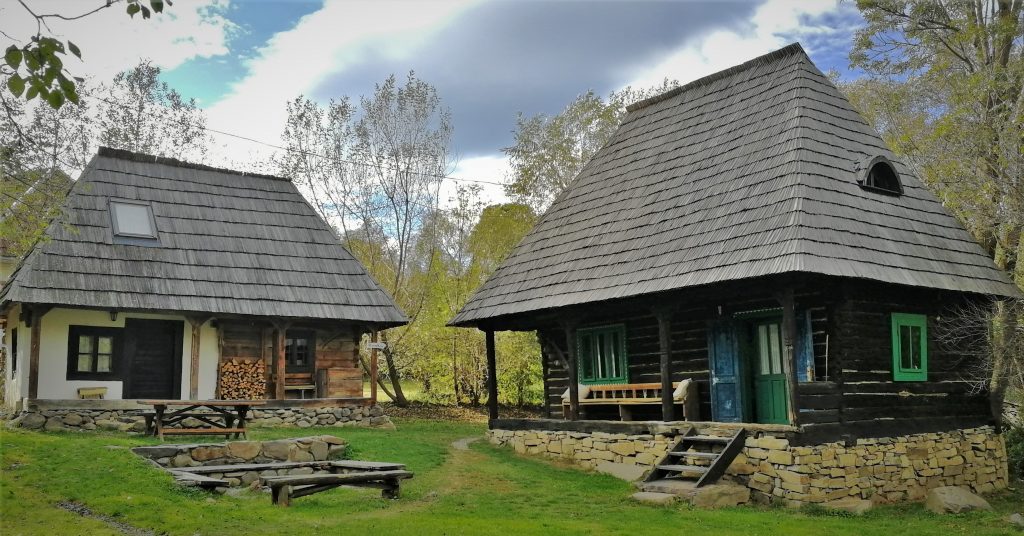 What to eat in Maramures

Maramures cuisine is not much different from Transylvanian gastronomy. Hearty and simple, using locally produced ingredients, with influences from Hungarian, German and Ukrainian cuisine. As Maramures is mostly a rural area, the calorie intake needed to be substantial, to keep the Maramures farmer active throughout the day. We will find in Maramures most of the dished found elsewhere in Romania, like sarmale, polenta, different cheeses, stews and soups. What is special about Maramures, is the specific alcohol drink: horinca. Is the result of the double distillation of fermented fruits ( mostly plums and apples), and among the same type of alcohol drinks in Romania, is the strongest one (minimum 50 degrees). At least this what the locals say about horinca in Maramures. Truth or not, the visitors will find out easily, like a glass of horinca is a customary element of the hospitality in Maramures.

But if you want some dishes more specific to Maramures than the rest of the country, we propose one soup and a breakfast recipe.
First is the “zeama de pastai uscate” which can be literally translated in “dry green bean pods soup“. The green pods, previously sun-dried on the porch, are boiled with different vegetables (celery, carrots, tomatoes), and perfected with garlic plus cream or sour milk (a local yoghurt). Bacon and smoked pork can be added as well.

Sun-dried bean pods hanging on the porch of a house in Maramures.

Second is “coleja cu branza“. It’s a breakfast dish made of layers of polenta and cheese. Paring polenta and cheese (or other dairy products) is common in Romania and there are dozens of recipes combining the 2 ingredients. The Maramures version is also adding on top fried bacon for more flavour. If you have “coleja cu branza” at breakfast, you would probably not need anything for the rest of the day, as this dish was meant for a farmer, not a tourist. 🙂